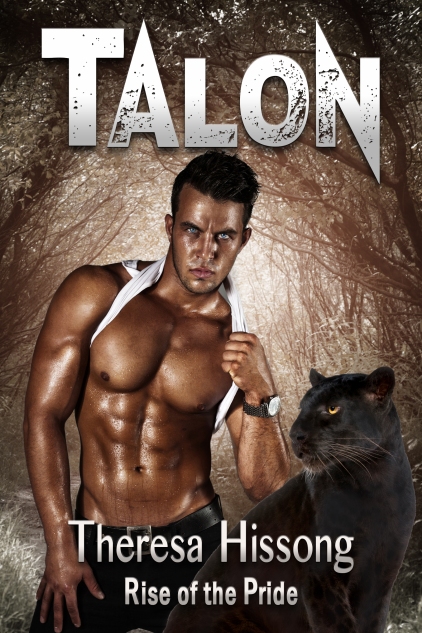 Here is a raw and unedited sneak peek from “Talon” Book 1 in my new paranormal series, “Rise of the Pride” out Feb. 2016!

A knock on her office door had Liberty groaning, afraid to open it to see who was standing there. Setting the letter opener aside, she stood up and walked to the door, pulling it open to find Talon towering over her. His body was so large that he took up the entire space of the door…and then some.

“Shut the door,” he ordered, eliciting a gasp from Liberty.

“What?” she asked, confused at the look on his face.

“You never open a door without knowing who is on the other side,” he stated. “Now…close the door, Liberty.”

She smirked at him and slammed the door in his face, only to hear two quick raps on the wooden frame.

She cracked the door to see him standing in the same position he’d been in only a few seconds ago. The thought of letting him into her office sent a thrill and about a million dirty thoughts through her mind. Clearing her throat, she stepped aside and pushed her hand out to the side in a silent invitation to enter the room.

“What did you want to talk about?” she asked.

“Our date,” he said, his voice rumbled with its depth. She had to fight her eyes to keep from closing in bliss just from the sound.

“Is that all?” she asked with a smile. She remembered the flower delivery and smiled some more.

“Is the Sherriff your mate?” he growled.

“Why?” she asked, narrowing her eyes. In fact, her hand still tingled with the creepy crawly feeling and she found herself rubbing it against the material of her jeans.

“Does it burn?” he asked, almost in a whisper. When she looked up into his eyes, they’d sparked amber again and she found it fascinating. It wasn’t like anything she’d ever seen. His ice blue eyes were still there, but parts of the blue were now amber and they seemed to glow. The amber parts were just little pin pricks of color.

“It feels weird,” she admitted. When he held out his hand, she automatically raised hers for him to take into his warm hands. The moment his fingers came in contact with her wrist that was now a little pink from her rubbing it, the feeling diminished. Her eyes shot up to his and then she saw it…his fangs had descended. “Talon?”

“I could kill him for touching you,” he whispered, still caressing her wrist. “In my world, a male doesn’t touch a mate…ever.”

“Why?” she asked, breathlessly. He continued to stare at her wrist and not into her eyes.

“When our kind mates,” he began, raising his eyes to meet hers. “If an unmated male touches her, it will cause the female pain. I don’t know why this is. It has been said that it was nature’s way of protecting the mates. They are precious to the males.”

“But we are not mated,” she whispered, watching his eyes return to their natural color. When his fangs receded, she felt like asking him if he could make them reappear. It was fascinating to her how these people changed into an animal and seeing his body transform, even slightly, interested her. She thought back to that book of Nova’s and she shook her head to keep from going glassy-eyed at one of the intimate scenes she’d read before work.

“Not yet,” he sighed. “If you are touched by a male and it is unbearable, I need you to tell me. It’s very important that you have my touch to heal you.”

“Even if the man has no intentions to mate me,” she snorted. “So, I’ll never be able to touch a man again? What about here at the bar? What if someone grabs me?”

“No man should ever grab a woman,” he growled. “And if a man ever grabs you, I want to know his name.”

“You can’t go around killing men for touching me,” she scolded, looking down at her wrist, seeing the skin had returned to its normal color. The icky feeling disappeared. How weird was that?

Instead of a reply, Talon growled and turned for the door. “Winter and his men have been at your home since nightfall. If you need anything, call me or just yell for Winter. We have excellent hearing.” The door closed and she was left staring after him.

The room felt as if she were in a wide open place. His presence didn’t linger in the room and she immediately wished he’d stayed.