***Warning: Graphic ***(Pictured below are Sexual Assault Kits aka. Rape Kits and these are photos from Google that are candy coated to give you an idea of what’s inside. But I can guarantee that when they are used, they are not this well put together for show.) 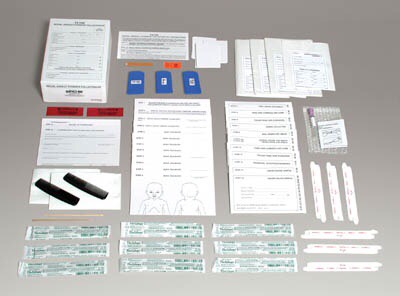 What has this world come to that women are seen as nothing more than an orifice for a man’s demented torture?

Did I get your attention?

Then close your eyes for a moment and put yourself into the victim’s shoes. Imagine what she went through…the residual feeling of her rape.

It’s not something you want to think about, huh?

And that last statement is a good thing.

Because it’s time we stop sticking our heads in the sand, ignoring what is happening to women and fight back!

Stop fucking looking away when this topic is brought up because it makes you feel weird! How the hell do you think the victims feel? I wouldn’t use “weird” as an answer.

Just twenty (20) minutes ago, I watched the CNN reporter read the victims statement. (the abbreviated one for TV)

Just twenty (20) minutes ago, my heart shattered for a woman I don’t even know.

Just twenty (20) minutes…that’s the estimated time the rapist’s father coined as his son’s “getting action”.

Twenty (20) minutes of sick satisfaction by a sick piece of shit who felt he had every right to violate this woman with “foreign objects” while she lay unconscious behind a dumpster.

This woman was processed and sent on her way home without being told anything. She found out everything from the news! Her own rape and assault was told to the media before it was ever told to her…the woman who’d been violated.

Do you know all of these people screaming about their “rights” to make $15 an hour working at McDonald’s?

Where the hell was this woman’s “rights”?

Why did her “rights” get published right next to the weekly weather?

The state of this society sickens me. Women have fought for equality since the beginning of time. We have risen above so much to show that we are not helpless twits without brains.

When are we going to stop slapping the hand of men who think it’s okay to take their liberties with a woman and punish them for not being able to control their dicks?

What is it going to take to stop the violence?

What is it going to take to stop some sick and twisted waste of fucking space who gets off on raping an unconscious woman for his own satisfaction?
Our world is not improving and I fear that these instances will continue to increase.

I encourage women everywhere to take a self defense class…learn to handle a gun…train yourself to fight back.

If you don’t take the class, please at least put your pre-teen and teenage daughters into a class. Give them the knowledge and confidence to protect themselves, because we all know that in twenty (20) minutes, a woman’s life can be drastically changed…forever.